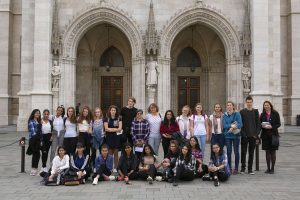 The presentation with more pictures can be found here.

This presentation is about the Cultural Exchange Program, between Árpád and Veres Péter secondary schools from Budapest, and St. Mark’s Girls senior School in New Delhi, India. The girls from India arrived on the 28th of September, to Liszt Ferenc National Airport, in the evening. It was Saturday, and on the first day, Sunday, we had a family day, when we visited shopping centres, and the Váci street. Riya, the girl, who I hosted, talked a lot about her family, and the festivals and holidays in India, including the Festival of Lights, and the Colour Festival.

On Monday we visited the two schools, first Veres, where the Indian girls showed us a dance, which they usually dance at weddings in traditional clothes, and only girls do it. After that, we went to Árpád, we had a lunch break, and they had a little rest. They also performed their dance in our school in the school yard so the other students also could enjoy the performance. Next we had a special „class” where two acrobats came from the Hungarian National Circus and taught us how to juggle, and how to walk on a tightrope.

On Tuesday first we visited the St. Stephen’s Cathedral, and on the way there, Riya told me a lot about her school, and school rules, like they have a rule, which says that what colour socks they can wear. For me, it was really funny and strange, but for them, it’s normal. After visiting the Basilica, we went to the Parliament, where we had a guided tour. We also visited the National Museum, we had a drama workshop there connected to the Seuso treasures, and after that we went home. It was the first day, when we talked a lot with each other, and started making new friendships.

Wednesday. For me, it was the best, because of the 4-hour sightseeing bus tour. We left from Árpád School at 9 o’ clock, and the first stop was at the Heroes’ Square, the tour guide talked about all the statues there, and after that we went to Vajdahunyad castle. We got back to the bus, went back to Buda across Elizabeth Bridge, and got off the bus at the Castle of Buda. We had a lot of free time there, the Indian girls took hundreds of photos of the panoramic view. Luckily we had wonderful weather. On this day, we also had a program in the Hospital in the Rock. The exchange girls didn’t really like this place, they got scared of the vax figures, and didn’t want to go into some of the rooms.

On Thursday we started off at the Pálvölgyi Caves, where we had a guided tour. In my opinion, it was the funniest program of the week. We laughed a lot, because the tour guide’s English wasn’t very good, and the Indian girls always asked us, what she said. So we translated from English to English. After this fantastic tour, we went to the Budapest Zoo, where we saw the new Shark School, the penguins and the polar bears, which they can’t find in India, because of the climate. We had a great afternoon, we went to a supermarket, and Riya told me a lot about Indian sweets and pastries.

On Friday we went to Szentendre, to the Open Air Ethnographic Museum, where we could bake traditional Hungarian bread. They tasted it, one or two of them really liked it, but the others didn’t. We had another program in Szentendre, which was the Marzipan Museum. In my opinion it was a great program, we saw a lot of beautiful figures made of marzipan, including the Parliament. We went back to Budapest, and had a perfect afternoon on the Margaret Island. With the girls we rode on “bringóhintó” (pedal coach officially). They wanted to learn the name but they couldn’t repeat it after us, because it’s too Hungarian, so Abigel told them to say tuk-tuk.

Saturday was the last day, we went to Kelenföld, where we said good bye to the Indians. They went to Prague for two days, and their plane landed in Delhi, on 8th October.

Our visit to India is coming soon. I can’ wait!!!